I’ve had the wonderful opportunity this December to co-lead an Advent Club at a local elementary school.  The theme of this year’s club is “Die Hoffnung von Weihnachten: an unsere Mitmenschen denken” (The Hope of Christmas: Thinking of Others). We have been discussing with our 1-3 graders what hope is, how we can find it in the biblical narrative of the Christmas story,  and then experimenting with how to pass it on to other people once we have it ourselves.
As usual, we began with a Godly Play story.  If you will recall, in the first week, I told the children the entire Christmas story, emphasizing that just as God chose to send hope into the world through a small, helpless baby, hope often comes in unexpected forms.  In week two I told the story of the Good Samaritan and we stressed that giving hope to others often costs us something.  This week we wanted to get the point across that hope and learning to give hope to others is a process and usually starts with small steps. So this week I chose to tell two Godly Play stories that illustrate this beautifully, the Parable of the Mustard Seed and the Parable of the Leaven (Yeast).
A Baby that grew up to change the world, a tiny seed that became a large tree, a little yeast that caused the entire dough to rise . . .   “Oh, I get it,” said one of the boys, “From little things come big things.”  Exactly.  I lit the Christ Candle again and reminded the children that if I blew out the flame, the physical light would be gone.  But the hope of Christmas, the hope that God will make the world a better place through His children,  is a light that does not have to go out.  We can carry this light in our hearts the whole year whereever we go.  And even though the children are small, they have an important role to play in this world.
Here is a picture of my colleague and the children thinking over the two parables and how they relate to the Christmas story: 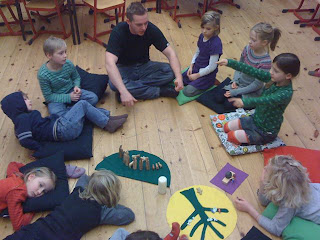 After the story, we planned our final project, which would be taking place the next morning.  We would be receiving a visit from a preschool in another part of Berlin and would be putting on a party for them at our school.  (This particular preschool caters to the needs of children with cardiac problems, although we did not tell our children this.)
Because the group that we visited last week, Die Arche, had given us gift bags at the end of our visit to them, we got the idea to make gift bags for the preschoolers.
Here are some pictures of our children filling the bags, tying the bows and painting decorative tags: 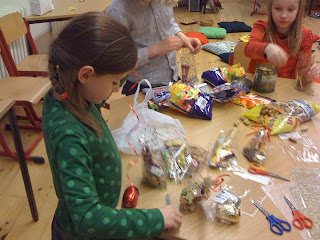 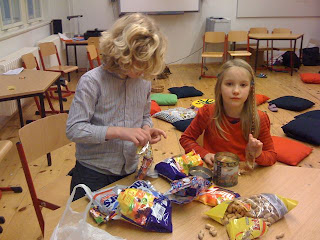 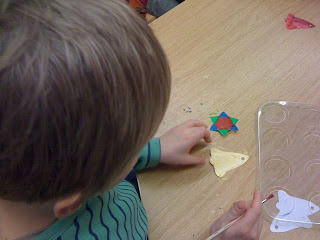 The next day, the preschoolers arrived at 10 am at our school.  Our kids got to miss some of their regular classes in order to help put on the party.  Our kids wanted to do a game room and a craft room again, very similar to what we had done at Die Arche last week.
We began the party by sitting in a circle and introducing ourselves.  The preschoolers led us in some Christmas songs, and then we ate Christmas goodies together.
The group dynamic was very different this week because the preschool children were younger than our kids. The preschoolers were far more interested in our facilities and the different toys in the rooms than in playing organized games!  Also, some of our older boys were rowdier than usual, perhaps because they were the big guys on the block this time.  The craft time went well and the older girls in our group did a great job of helping the preschoolers.
Here you see one of the preschoolers absorbed in a new toy: 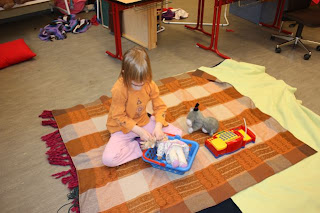 Here are some photos of our craft time. The woman in the picture is a teacher from the visiting kindergarten. 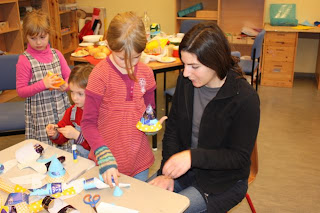 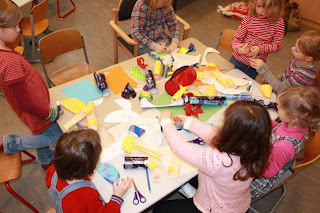 Because the preschoolers could only stay for a short time, I chose a craft that the kids could finish in a short amount of time.  It is called Stacking Trees and I found it through the Living Montessori Now website. Here is a child displaying her “matryoschka style” Christmas tree: 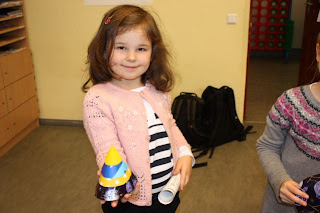 When I asked our children later about how the experience had been, they answered that it had been easier to mix with the preschool children and play with them, because they were younger.  The drawback had been that the party had been too short and the preschoolers had to leave just as everyone was getting comfortable with one another.

This party was another small step in learning how to be an agent of hope for others.  Like babies that take small steps before they can walk, our children are learning to find their balance in interacting with complete strangers.  The experiences with these children during Advent 2010 are priceless and I wouldn’t trade them for anything!  May the small seeds planted in their hearts flourish and may God use their lives to shine light into dark places. 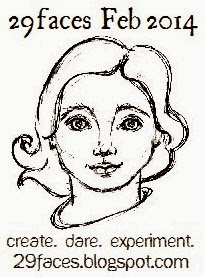